We have had a bit of rain over the weekend, with more expected on the way.

There are two parts to this event:

Part 1: We had an exceptional amount of rainfall in a short period of time. That was evident by the layer of water that covered the first floor where I am staying. It is said that if there was that much water on our floor, then in other parts of the city there was a lot more water in people’s homes. Such water is not pure, yet has receded. And my host has took care of the internal water yesterday afternoon, including disinfecting the floor. 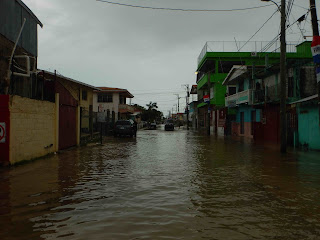 Part 2: If the river (that runs the width of the country) should be overflowing its banks about mid-way into the country before it arrives at the sea, then by the time it get to the sea in a day or two after that, we would have a “flood” by insurance definitions. So, we are waiting to hear and are praying that all will be well or minimized in the next day or so, by the time that area of water reaches us. As of this morning, I do not believe that we are in a Flood Watch at the moment, though I have not heard an update as of this writing.

Not everyone is feeling the effects of the rain in equal proportions, in part because of the storm drain infrastructure that the government has been installing, particularly in Belize City. Some roads, which were like small rivers Saturday evening, were completely dry by Sunday afternoon, about 2.5 hours after the water started to subside. Superb effort. Superb results, though some people’s neighborhoods have not been improved to that standard, quite yet.

Effects of the national storm vary region by region. A special case is that of apparently migrant squatters who have built dwellings to their own standards over lagoons, and they get their electricity via extension cords across wooden bridges (called “London bridges”), electrical cords which do not always stay above water level, and shall we say, it is rumored that this is so because they do not always acquire their electricity through normal means.

For most people, there is a varying degree of water damage to homes, particularly those built on the ground as opposed to those that are on raised foundations or on stilts, much damage being to internal possessions including electrical appliances, and this further varies by neighborhood. But no one has died because of the storm. Repair work is in process, and there is more to do.

The forecast is for continual thunderstorms throughout the month of October, an anticipated break being the scattered thunderstorms forecast for the Cursillo weekend, this next weekend. Typically, based on past experience: of the 42 people who are candidates for the weekend, there are likely to be about 25 who show, depending on schedules and the weather. Please pray for another kind of outpouring on the weekend, an outpouring of the Holy Spirit.
Photos by Fr. Shaw Mudge, 18 Oct 2015.

There is a certain solidarity here for having survived an historic event. People are bouncing back. Merchants are reclaiming their stores.

To summarize the mood of the nation, as Bishop Philip of Belize said as part of his email to us clergy yesterday evening:

“I trust that all is well with you and your family.  For those in the areas affected by the current weather and flooding, I hope that you and your congregants are coping as well.”

On the home front, Julie is celebrating her birthday, this week.

I pray for you every day, and may God bless you in whatever you are doing, 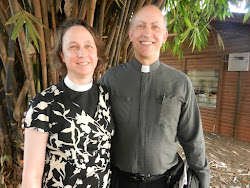